Horse Laminitis -  What is Laminitis and How Can It be diagnosed?

I recently attended a talk by Robert A Eustace b.v.sc. Cert.e.o. Cert. e.p. Frcvs., about Horse Laminitis,  Robert is a founder member and a Director of The Laminitis Trust, the only registered charity dedicated to supporting research into horse laminitis.   He has spent most of his working life studying, and researching Horse Laminitis, and runs his own horse laminitis clinic in Wiltshire.  During the talk we were given precious information about this horrible condition, one of the most common causes of lameness and disability of horses and ponies in this country.   I feel much more informed about the condition now and the information that I have gained will help me be much more astute when dealing with laminitis prone or simply preventing the start of it.
Information is key and so I hope that what I share with you about Horse Laminitis will be of  benefit to you as your role as a horse carer.

What is Horse Laminitis?

More causes of Horse Laminitis are listed below, but generally the main one is that the horse overeats too many carbohydrates from either gorging on too much grass or hard feed.  Over a period, as the horse eats more glucose than it needs for maintenance; the excess energy is laid down as fat, eventually causing, what is now being recognised as a metabolic syndrome and insulin resistance,  predisposing to Horse Laminitis.

HOW TO DIAGNOSE LAMINITIS:

If your horse is standing with his weight bearing on his heels as image below, 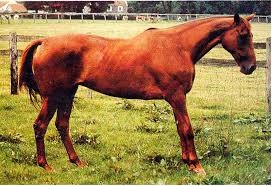 This is a good indication that he has laminitis in his front feet:

A horse with laminitis in his back feet will tuck his hind legs under him trying to get the weight off his hind feet toes.  Sometimes in acute cases they will refuse to walk on because of the pain.

The Different Types of Laminitis:

The severity of horse laminitis has been divided into four groups by the research done by the Laminitis Trust clinic:  Below are the explanations of each group as described by the Horse Laminitis Trust:

Group A:  Horse Laminitis – Cases were assigned to Group A if they had clinically normal hooves, and no hoof distortions characteristic of chronic founder. These animals had abnormally strong pulsation in the digital arteries of affected feet, tended to adopt a heel-loading and toe-relieving stance, and sometimes showed pain over the dorsal part of the soles of the feet. They sometimes showed resentment to light palpation around the coronary band and shifted their weight from one foot to another.

Group C. – Sinkers  – All sinkers showed depressions which extended the full length of the coronary band. They also showed a bounding digital pulse and reluctance to move or to have a limb lifted. Some cases adopted a toe-relieving stance, others tended to stand flat and shift weight moving in a heavy flat-footed manner, slapping the feet down in a similar way to cases of cervical maladjustment syndrome (wobbler). However none of the sinkers in this study showed signs of chronic founder.

Group D. – Chronic Founder. These cases showed changes in the foot characteristic of chronic founder. Changes included a broken back hoof-pastern axis, over-grown or concave dorsal hoof walls, stretched white lines from quarter to quarter, and divergent growth rings on the hoof walls with the rings being wider at the heels than the toes. There was relative over-growth of the heels and the soles were flat or convex. On palpation the coronary bands often seemed soft or indistinct and the skin seemed to merge directly with the horn. Some of these animals were also demonstrating the signs of laminitis or acute founder. Nevertheless, all cases showing characteristic signs of chronic founder were classified as such in Group D.

The sooner the condition is spotted and treatment starts, the more likely that the horse will return to normal health again, if left untreated horse laminitis can be fatal.

Whether acute or just the start of the symptoms the initial treatment is the same.

Prevention Is Better Than Cure!

So how can we prevent horse laminitis?

Any horse or pony allowed to graze for 24 hours, 7 days a week on normal pasture could become laminitic! so..

A sheltered yarded area at Hivron Horse Haven, with very little grass used for the fatty club during the day!!

Well, I could go on and on, because the subject of Horse Laminitis is vast.   Hopefully I have covered enough so that more of us can be a little more informed about this horrible condition and work towards preventing such attacks.

If you would like to know a little more about what we do at Hivron Horse Haven then click here to visit our site.    We cater for horse laminitis cases, our ground and system lends itself very well to the condition.

Thank you for reading my  my blog I hope you have enjoyed it and found it informative.  Please contact me if I can help with any questions, you can find all your answers to queries about Horse Laminitis by following the links above.

I started Hivron Horse Haven in 2004. We specialise in the care of retired, box rested, convalescing and resting horses and ponies. We are based in the beautiful countryside of the Mid Wales border. I also market horse related products and country wear.
View all posts by Rachel Holman →
This entry was posted in Uncategorized. Bookmark the permalink.